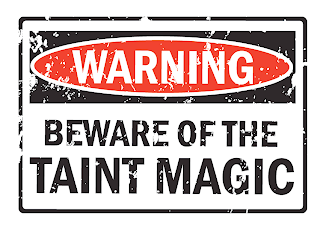 Three Word Wednesday (as the name implies) provides as a prompt, three words to be used together in one poem or prose piece each Wednesday.  This past week, the words were plausible, taint and willingly.

Talk about a challenge.

Now, before I get to the poem and its backstory (yeah, yeah - I know - one of the trite, overused words I shouldn't be using, but whatever...) I want to mention something about today's graphic - I didn't create it.  (Can't take credit where it's not due, and all that, right?)

What I did do was plug the word 'taint' into Google's search field and then, after getting a results page, I clicked on Images, and this was one of the images I got.  Thank you to Fashionably Geek for the cool graphic.

Now then, on to the poem.  I decided that I wanted to do a Glosa for the prompt, which requires a quote or poem (or something from another source of inspiration) to be used as an epigraph for the starting point.  For that, I Googled (yep - I am using Google as a verb here...sorry) "quotes with the word 'taint' in it," and found something I kinda liked.

So, without taint or any plausible further ado, I willingly give you the poem:


‘Taint Necessarily So
Texto:
“His money is twice tainted:
‘taint yours and ‘taint mine.” –Mark Twain
Glosa:
A pretty picture, this here fellow has painted,
‘bout some o’ the ready, on which I’m acquainted,
and I’d willingly pass up, because I’m so sainted.
His money is twice tainted.
But sainted or not, I just wish he’d assign
a percentage or two, as a plausible sign.
‘Tis a bit o’ good will that no man would malign.
[Ah, but…] ‘Taint yours and ‘taint mine.
###
Posted by RJ Clarken at 10:33 AM