We wait along the trolley track:
To work, to home…one way, then back.
We work all day to earn our dime...
right now, you see, it’s quittin’ time.

Each secretary, each shop clerk
all through the week, go off to work.
Sometimes it seems an uphill climb.
Right now, for us, it’s quittin’ time.

The New Deal, says the president,
improves lives of each resident,
so all must do their part, but I’m,
right now, quite glad it’s quittin’ time.

We wait along the trolley track:
right now, you see, it’s quittin’ time.

Notes:  The form is Kyrielle Sonnet.  The poem was inspired by Sepia Saturday's prompt of 'work.'  The first thing which came to mind, based on their photograph, was the 1930s Depression and the New Deal.  With that in mind, I looked up posters and artwork from the WPA, an example of which is above.

O Darling, you look so somptueuse.
Your fashion sense is first page news,
but then, you’ve always been très chic.
Let’s do the town – all night…all week!

My watered silks?  They’re from Paris;
the fan’s handmade.  It’s from Capri.
The jewelry’s from Bendel’s boutique.
Let’s do the town – all night…all week!

We’ll pop a cork and toast ‘til dawn
at ‘21’ and then move on
for breakfast with our little clique.
Let’s do the town – all night…all week!

Notes:  The form is Kyrielle.  The poem was inspired by Sepia Saturday, whose prompt theme is 'Going Out."  This was a real fun romp.

An orchid, which one finds in nature,
cannot be reproduced by mere humans, 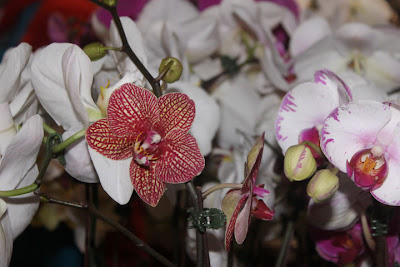 except perhaps as an interpretation…
but if such a thing were possible, 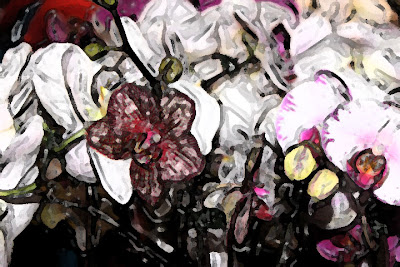 it could only be as beautiful
as one's imagination would be able to make it so.

Notes:  Imaginary Garden with Real Toads provided a prompt of writing about man and nature - and the relationship between the two.  For once, I didn't use poetic form, but just wrote something kind of free verse-ish.  The first picture was of some naturally beautiful orchids which I photographed at the Philadelphia Flower Show. (It was totally fabulous!)  Now, granted, by the act of photographing a flower (or anything, for that matter) one ends up adding a human element.  But for the first in this case, it is only of the plant.  What's my point?  Because the second picture, to add a definite man-made touch, was 'filtered' in PhotoShop so that the picture looks more like a drawing or a painting than the genuine article.

She’s gentle, sweet and delicate
but priests could ne’er stay celibate
if  they’d but catch a glimpse of her.
She’s ginger; she’s a saboteur.

Demurely, she will pour chartreuse
into your flute.  Then she’ll seduce
you, ‘though you are a connoisseur.
She’s ginger; she’s a saboteur.

Pearls and pale organza dresses
serve as backdrop for flame tresses
and in the end, you will concur.
She’s ginger; she’s a saboteur.

Advice, in this case, would prove moot.
Her auburn curls? Forbidden fruit.
She’s everything that you’d prefer:
She’s ginger; she’s a saboteur.

"There’s many a man has more hair than wit." ~William Shakespeare

A perfect instance of a man
whose mustache has its own game plan.
Edwardian, he’s style and grace.
He tells the world: “Regard my face.

“With just a bit of mustache wax
I ‘m dashing, so I can relax
and strut inside most any place.
I tell the world, regard my face

“and note the look that brilliance speaks,
above my lips: two perfect peaks
that curl on ends to fill the space.
I tell the world, regard my face

“which says I’m full of wit and verve.
It’s nothing less than I deserve.
My whiskers are what I embrace:
they tell the world, regard my face.”

I’m fuzzy and I’m cuddly too.
You want to hug me…yes, you do.
My bark is worse than my wee bite.
A Cairn‘s all sweetness and all light.

I am all heart beneath my coat,
a shaggy movie star of note.
I’m really big, ‘though I seem slight.
A Cairn‘s all sweetness and all light.

When o’er the rainbow, Dorothy flew
she took along – well, you know who.
And Toto never got stage fright.
A Cairn‘s all sweetness and all light.

I’ve fluffy, wheaten brindle fur
(so never say, “You mangy cur!)
Instead just brush me.  Ooooh…delight!
A Cairn‘s all sweetness and all light.

Notes: All three poems are in the form Kyrielle.  The inspiration was based on the prompt of 'hair' (in a vintage sense) as provided for by Sepia Saturday.  The title of the post is actually an allusion to the show Haïr (which, in French, has an entirely different meaning than the English word.)  As for the actual poems, I decided that I wanted to do something for men, for women - and then for Cairn terriers, in honor of my wonderful little Corky. She is the rockingest dog ever, and even at 15 she's still the boss.
Posted by RJ Clarken at 5:55 PM 15 comments:

writing with light
contrasts bright/dark...
the nighttime tale
leaves a trail and
reveals the magic of mind and hand

Notes:  This poem was written in the Southeast Asian form Ya Du.  It was inspired by the Theme Thursday prompt of 'spectrum.'
Posted by RJ Clarken at 9:47 AM 3 comments:

if I had a string
long enough, I’d hold on tight
and fly with the moon

to catch a moonbeam
takes imagination and
a lasso of dreams