♥♥♥ First, thanks to all the kind folks who stopped by here yesterday (and throughout the week) even 'though I hardly spent any time this week visiting you in return.  You rock.  (And I promise I will be around to see your stuff real soon!) Second, really thanks for all the nice words posted in response to my 'out-of-character' poem yesterday.  Downers do happen, and writing them out seems to be the best way (sometimes) to deal with them.  And third, I have a few more poems written to prompts which I need to get out before this merry month of March is history.  ♥♥♥

Okay then. On Monday, Monday's Child posted an illustration from the 1920s by Freddie Langler, and I paired it with an Ovillejo.  Three Word Wednesday provided the words 'loud, persuasive and riches' so I penned one 5/7/5 Haiku to cover all three of 'em.  Yesterday, The March Challenge provided a prompt about writing and erasing (for which I wrote another poem beside Erasure) and also, today, Theme Thursday wanted writers to write about 'silly' and the March Challenge posted the final March challenge word of 'new world.'  I wrote one 5/7/5 Haiku for those two, too.

Yeah, I know - it's a lot, but I'm tying up all the remaining March loose ends.

And with that in mind, here's the stuff... 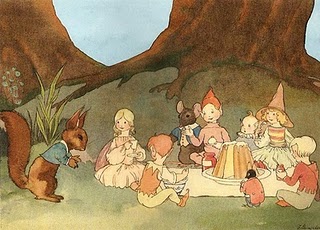 Invitation to Tea
Come, sit and have some tea,
if free.
We’re underneath the trees.
We’ve cheese
and honey, fruit and spread
for bread.
Please join us – go ahead.
There’s always room for more
Here – take a cup.  I’ll pour.
“Gee, thanks!” the Bunny said.
###
Supporters and Devotees
O persuasive pitch,
that loud call to adherents…
he had riches soon.
###


Movie Review of Plan 9 From Outer Space (1959)
The average pencil is seven inches long, with just a half-inch eraser – in case you thought optimism was dead. ~Robert Brault
Optimistic Elliptical (Erased) Review
…[M]ost film critics, reviewers, and fans
will invariably mention Plan 9 From Outer Space; .
..honor …movie of all time. …
There is no doubting that this is
[the] …word to describe it.
[T]his movie…was actually
quite entertaining, and therefore…
entertainment value. …
I think everyone
should see Plan 9 From Outer Space …
And…The Real Review, by Rinkworks
When asked to list the worst movies of all time, most film critics, reviewers, and fans will invariably mention Plan 9 From Outer Space; many will give it the dubious honor of being the worst movie of all time. I feel this is slightly unfair.
There is no doubting that this is a bad movie. "Bad" isn't even a strong enough word to describe it. Some of the lowlights of this movie include: tombstones that teeter when the actors run into them; a hubcap-on-a-wire flying saucer that mysteriously turns into a toolshed upon landing; a single shot of a car pulling to the side of the road that is used every single time someone arrives on scene, regardless of what car they are driving or what time of day or night it is; actors who are visibly reading from cue cards; at least one scene where an actress completely blows a line and nobody calls for the cameras to stop rolling.
However, this movie is not the worst movie I have ever seen. I say this because this movie was so bad, it was actually quite entertaining, and therefore I cannot in good conscience label it "the worst movie of all time." I'll reserve that label for a movie that was not only bad but was also completely devoid of entertainment value. So far, for me, Showgirls garners that label. I think everyone should see Plan 9 From Outer Space at least once. Anyone with a camcorder could make a better movie, but the chances of getting it on the big screen and into every Blockbuster store in the country so the rest of us can laugh at it are minimal.
###
Silly World
Duct tape is like the force.  It has a light side, a dark side, and it holds the universe together.  ~Carl Zwanzig
Just remember, if the world didn't suck, we'd all fall off.  ~Author Unknown
It’s a silly world…
old or new, we’re stuck with it
as it’s stuck with us.
###
Posted by RJ Clarken at 5:24 PM 12 comments:

I'm sorry for the darker tone my post is taking today , but I saw something on another website which deeply affected me in a strange, sad way.  My response to such things is to try and write about them.  The March Challenge posted a prompt today about writing and erasing.  We Write Poems gave a prompt of 'musty moments.'

Erasure
A family history should be a musty moment affair
of brownish curling photographs
and ribbon-tied yellowing letters,
of strawberry jam recipes written in faded blue ink
and steamer trunks full of odd gloves and army medals.
But when such things do not exist
because they were erased
along with the people
who should have grown old
while they were telling the tales,
then those moments can never become musty
and there is nothing
except vague recollection;
sad words we once heard as children
by the adults who whispered them late one night.
###
Posted by RJ Clarken at 12:32 PM 13 comments:

As you may already know, Da Vinci produced several paintings of a certain very well-known lady.  The most famous one hangs in the Louvre.  The others are in private collections.  Not true.  Well, maybe not true.

In my collection, I have one of those masterpiece paintings.  Well...kinda sorta...

See, last year, for my son's birthday party, he wanted a mystery themed party, but not a murder mystery.  (Too violent.)  I suggested a theft mystery, where the other kids could play roles (in costume and with props) and answer questions from him, as the chief detective investigator of the 'crime.'  My son liked the idea but wondered what could be 'stolen.'  I said, "Jewels or art, perhaps?"  He rather enthusiastically chose ART.

So...I wrote out questions for him, and character descriptions for his guests (to go along with the costumes and props we thoughtfully provided) but then realized - we actually needed a work of art.  Through the magic of PhotoShop, we soon 'acquired' our masterpiece and the game was afoot.

Unfortunately, my son's twin sister's slumber party (with a dozen or so screaming tweens) was the night before, and I was hugely (yawn yawn) exhausted from that - but nevertheless, we somehow managed to pull it off.

Today's prompts come from The March Challenge (effervescence) and Magpie Tales (a picture of the famed Mona Lisa.)

My poem today is about my work of art. 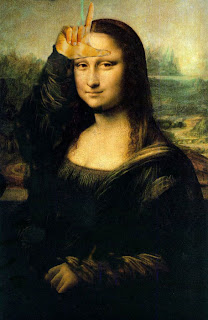 La Giaconda - The Unforgettable Lady
“She had a real effervescent personality.  You wouldn’t forget her.  That’s for sure.” ~Andrew Jarvis
I think you get the message here.
It seems to come out loud and clear.
No wonder that Da Vinci’d choose her:
She modeled for his Mona Loser.
###
Posted by RJ Clarken at 11:24 AM 15 comments:

When the circus comes to town...

The March Challenge, in honor of the fact that 'on March 28, 1881, “The Greatest Show on Earth,” also known as the Ringling Bros. and Barnum & Bailey Circus, was formed,' wanted writers to write about the circus.  I wrote a Monotetra about it:
Ringside
Trapeze artists fly through the air -
and look!  Is that a dancing bear?
And elephants!  Oh this I swear:
my love affair, my love affair
with circuses is still with me
since earliest of memory.
They come to town?  I want to see
as devotee, as devotee
what’s under Big Top.  Clowns and tricks
do capture interest: they transfix
while jugglers juggle balls and sticks.
I get my kicks.  I get my kicks.
I’ve often wondered at each show
if I would have the guts to go
and run off with them, but…you know…
I can’t, although…I can’t, although…
it’s fun to dream, but audience
is where I’m meant to be.  Makes sense,
since I’ll still get my fill of tents
without suspense; without suspense.
If I were meant to walk into
a cage of lions (my debut?)
I fear the lions might well chew
more than my shoe, more than my shoe.
So here’s to sitting in my seat.
I get to see it all, complete.
I’ll cheer to each and every feat.
My three-ringed treat!  My three-ringed treat!
###
Posted by RJ Clarken at 10:14 AM 5 comments:

Oh, the uncertainty of it all!

The March Challenge suggested we reflect on uncertainty. (Maybe?)  Sunday Scribblings was all about nearly. (Almost?)  And One Single Impression was kinda sorta hollow.  (Perhaps.)

As you can see, I'm a bit unsure, but anyway, here are the words...

Hollowed Grounds
The trouble with the world is that the stupid are so confident while the intelligent are full of doubt. ~Bertrand Russell
Hollow confidence
is the realm of the stupid.
At least, I think so.
###


(Nearly) Famous
I’m (nearly) famous!
Check me out.
From coast to coast
there is no doubt
I’m quite well-known
(in certain spheres.)
That’s how it goes
with ‘penned’ careers.
###
The Uncertainty of a Shooting Star
For my part I know nothing with any certainty, but the sight of the stars makes me dream. ~Vincent Van Gogh
I look to the stars,
too deep perchance to dream…
I dream, anyway.
###