Get Your Red On

Rispetto de la Rouge
Red is sometimes called cinnabar or claret
or ruddy, sanguine, ruby or vermillion,
or raspberry, crimson, poppy or scarlet.
I’ll stop here, since ‘red’ names?  More than a zillion.
Okay, I say with a blush:  Hyperbole.
But the thing is, as a color, red’s got reverbole,
a fancy word for echo. (I forced this rhyme.)
So get your rouge on…it’s paint-the-town-red time.
###


Notes:  Poets United Think Tank Thursday used red for their prompt this week.  And because Poetic Asides featured the form Rispetto this week, I decided to go with it for my 'rosy' poem.  (Get it?)
On another note, Marie Elena and Walt chose me (yeah, you 'red' that right!) to be the subject of this week's poets' spotlight over at Poetic Bloomings.  Totally cool and lots of fun.  If you get the chance stop by and see my interview.  And please feel free to leave a comment too if you are so inclined, 'cause I just love that sort of thing, y'know?  Thanks!
Posted by RJ Clarken at 2:18 PM 5 comments:

A Matter of Charm and Taste

A Matter of Charm and Taste
“Charmed, I am sssssssure,” said the boa snake
to the man who played airs on his flute.
“Please join me.  I’m having tea and cake
and maybe…perhapsssssss…a bit of fruit.”
The snake-charmer man put down his flute
and replied, “That suits me to a ‘T’.
I could do with some tea, cake and fruit.”
So they went to the old banyon tree.
There, they found a table set for tea
so the snake asked the charmer to serve.
The flute man poured with great gallantry
while the snake consumed an hors d’oeuvre.
The snake remarked, “How nicely you sssssserve
and how nicely you show you have taste.
I think I’ll have another hors d’oeuvre.” ...
... Then he ate the poor flutist with haste.
A warning to all with breeding and taste
be careful with your tea and your cake.
Do not accept invites made in great haste
especially from a charmed boa snake.
###
Notes:  Magpie Tales posted the above objet d'art for use as today's prompt.  I decided to have a bit of fun with it, and chose the form of Pantoum in which to do it.
Posted by RJ Clarken at 7:06 PM 10 comments:

The picture tells the tale: a railway out of town... 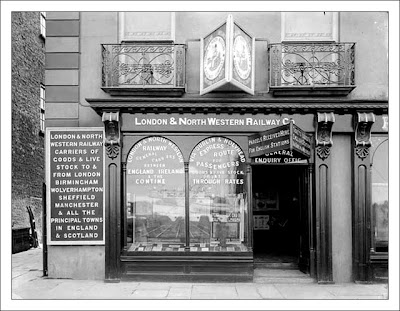 Sepia Saturday posted this wonderful picture from 1910 of the booking office for the London & North Western Railway Company in Waterford, Ireland.

It brought to mind Edwardian era ladies in long dresses and men in suits and duster coats, arriving and departing for a world of different purposes or reasons.  In this, I saw a story - and one fellow's letter (written in the poetic form Novelinee) tells the rest of his tale. 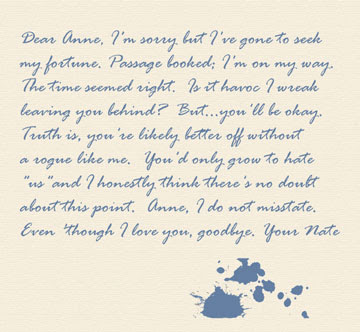 It may be the lowest form of humor...but a pun is fun!

Lexicon Love
So, if you have
addictionary
you’re hooked on terms.
Cause?  Word-list germs.
###
Chow Down
A cantina
cannot serve a meal
since the venue
has no menu.
A restaurant
like this only has
surly waiters.
Never caters.
###
Notes: The form is Pun-ku.  (Actually, the second poem is a double Pun-ku.  Salvatore Buttaci is a poet and writer who came up with this new humorous poetic form.  It is called the Pun-ku, and it's really fun.  Here's how you do it ...


The Revenant
They say there are no comebacks, but
amidst the sad detritus…what?
A man that’s barely there walks by;
a house with curtains shredded, torn,
the features simply too care-worn…
and hues?  They are in short supply.
Yet, once this place and person meant
a world that’s far from ‘revenant.’
I wish I knew the reasons why.
###


Notes:  The form is Nove Otto.  The poem was inspired by the above Andrew Wyeth painting, as thoughtfully provided for by Magpie Tales, for the weekly prompt.
Posted by RJ Clarken at 10:06 PM 16 comments:

Game On
In nineteen twelve, the Polo Grounds:
a pitch, a swing…Wood makes the rounds
as Boston, N.Y. duke it out.
The crowds are up; they’re on their feet.
They’re roaring for their team to beat
the opposition.  There’s no doubt
collective breaths will all be held
since on that day, the Sox repelled
the Giants, with the final out.
###
Notes: Sepia Saturday provided an old photograph for today's prompt which tell a story (President Wilson at a train stop.)  It was a really cool picture, which I may use in a future poem, but when I saw the above snapshot, I had to have a go at it.


In case you didn't know, I am a baseball fan (in general) and a Phillies fan (in particular.)
Go Phillies!
Anyway, the poetic form is Nove Otto which was highlighted at Poetic Bloomings this week.  It's a fun. seriously addicting poetic form.
So, get your game on and check it out!
Posted by RJ Clarken at 9:50 AM 11 comments:

Fast Fable
Thus, in haiku-speak,
allegro allegories
mean prompt parables.
###
Note:  Laurie Harris Kolp is a contributor at Imaginary Garden with Real Toads.  She provided the prompt for today's poeming, with the word 'allegro.'  However, there was a small catch to the prompt:  in addition to using the word 'allegro' which means quick or brief, poets can pen no more than eight lines to the single stanza (an octave) of our poems, and we have to write it in under a minute.  Give it a try - it's really challenging and fun!

So, deasil’s just another word
for clockwise, which is more preferred.
And how did they come up with this?
But on the other hand, admins
of lexicons say widdershins
which otherwise one might dismiss
since counterclockwise means the same
as widdershins (a better name?)
Yes…hands on clocks tick tock like this.

Notes:  Poetic Asides' prompt for this week was to write a remix poem using an older poem (yours or someone else's) to orchestrate a new poem.  For this process, I took a poem I wrote several years ago, whose form is the Passerat Villanelle. To write the new poem, I used a suggestion from Poetic Bloomings  Their 'In-Form Poet' entry this week showcased the poetic form Nove Otto, which is the form for the second poem.

Both were all about the wordplay (something I love!) having to do with clock direction.

So, thanks for taking the time to stop by and Dali a bit with me today.  ♥