A Haiku and a Sonnet

First, the Haiku.  February is the month of the Haiku-a-thon!  Few Miles is a site which actively encourages poets to write twenty-eight haiku during February - one for each day of the month. 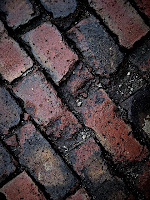 Cobbled Bricks
I gingerly tread on old cobbled bricks
which pave the roadway to dark parts, unknown.
I seek Charon to navigate this Styx
but friendless am I on brick-laden stone.
Which door will lead to the warmth of the hearth?
Which door will lead to the chill of a Swarth*?
Crossing these cobbles and bricks bring me fear.
All that surrounds me is cold and austere.
I take but a step, and then look around.
Nothing’s familiar and nothing feels close
except for dread on a scale grandiose;
except for ghosts of the dead that abound.
And then, when all hope has vanished – a light.
It beckons me home, to end this drear night.