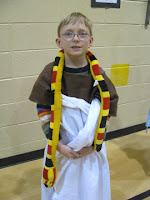 You know what was really cute yesterday?

Eight and nine year old kids dressed up in costume, intended to look just like people in the biographies they had to read, in order to write their book reports.

At my kidlets' school, the third graders (and yes, both of my kids are in third grade this year – I’m a mom of twins!) had to read a biography for their winter book report, and then they had to dress up like the person of their respective books and give a report on that person, as if they were that person.

Voice. Yes, they are starting to learn all about that, along with getting a crash course in seed ideas, lead sentences, clever phrases and so on. It was an interesting take on doing book reports – not at all like in the days when I was a kid. Back then, we read a report to the class that we’d written, or maybe we made a diorama. Not now. It’s much different, but far more creative, which I really like.

But in addition to the actual book report and costume and speech for their classes, the kids also did this thing called the Living Wax Museum. For this project, all the third graders stood by class (there are four third grade classes this year) in two rows each around the perimeter of the gymnasium. Moms and dads and other relatives were invited in to see it, and the idea was for us grown-up folk to walk around and observe the kids, who were posing and/or standing with appropriate props. When an adult tapped a kid on the shoulder, the kid 'came to life' so to speak, and spouted factoids about his or her person.

As you might expect, some of the kids really got into it, and were very show-biz-y - and other kids probably wished they could be someplace else. Yep - any place else but there. But as a public speaking project it certainly was a fun one (at least, from my grown-up perspective, anyway), and each kid most likely did learn a thing or two about a famous person from history.

There were a number of Abraham Lincolns, George Washingtons and Albert Einsteins. There were two or three Amelia Earharts, Helen Kellers, Florence Nightingales and Rev. Dr. Martin Luther King Jrs., too. And as you might guess, sports figures were portrayed prominently by a number of kids. But there were some interesting standouts who were one of a kind (and not only my kidlets, who as it happened were one of a kind, too.)

Here’s a few photos from the Living Wax Museum...
Posted by RJ Clarken at 9:23 AM