Quaterns get their turn today

A quatern is a poetic term for eight syllables in a line.  It's also a French poetic form (rhymed or unrhymed) with sixteen lines in four stanzas, where the first line moves down one line in each stanza until it ends the poem as the final line.  And...(ready for this?) it is also a cardinal number that's the sum of three and one.  Cool, right?  You learn something new every day.

The reason for all of the above is that I decided to put the quatern to use today.  Monday's Child posted a lovely illustration by Clara Burd.  The poem I wrote for it was in the form of quatern (rhymed.)  The March Challenge posited a challenge to write a poem about patterns.  The poem for that one plays with another poem's pattern - and the word 'quatern' gets in there, somehow. 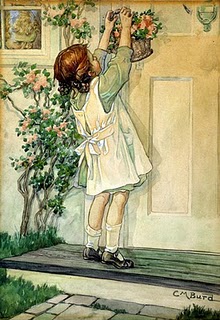 Hanging a Basket on the Wall
Hanging a basket on the wall,
filled with some bright forget-me-nots
is my own way I come to call.
I spread my joy with flower pots.
Oh please come outside, just as I’m
hanging a basket on the wall.
This is the stuff of nursery rhyme…
the scent of flowers does enthrall.
They should stay fresh past evenfall,
but don’t forget to water them.
A little sprinkling on them all ~
on petals, leaves and vine-green stem.
It’s been most pleasant here with you.
I’m glad I stopped to pay this call:
I’ll come again, when I pass through,
and hang a basket on the wall.
###
Breaking the Pattern
“If you have always done it that way, it is probably wrong.”  ~Charles F. Kettering
Roses are red.
If you step in mud you’ll leave a muddy shoeprint.
This poem is deviating from that
which is considered the blueprint.
Violets are blue.
Eight syllables in a line are called a quatern.
It’s also a cardinal number
which can be the basis of a pattern.
Sugar is sweet.
Wanna break the rules in poetic form?
It’s okay, if you know them first,
which is, strictly speaking, not the norm.
And so are you.
Hey!  Got your attention!
This poem’s totally wrong, by
which it just defied convention.
###
(Note: Per several sources, the poem, ‘Roses are red, violets are blue, sugar is sweet, and so are you.’ was written by an unknown poet in England about 1784 and is a Nursery Rhyme.)
Posted by RJ Clarken at 11:22 AM