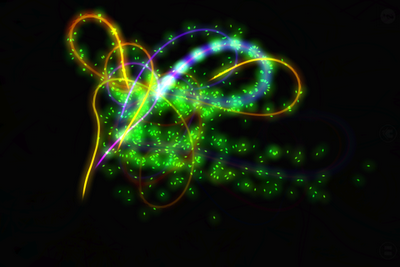 One wondrous night I caught a view:
bright hues which danced a pas de deux
with sparkles trailing like a snake.
Was this a dream?  Was I awake?

Yes, glitter, neon, flashing lights:
my vision rose to spectral heights.
Hallucination?  A firedrake?*
Was this a dream?  Was I awake?

Like Northern Lights, they eddied, swirled.
A thousand stars; a brave new world.
I thought, “Don’t stop, for heaven’s sake!”
Was this a dream?  Was I awake?

A wondrous sight I once did view…
Was that a dream?  Was I awake?

We all must face decisions, but
it isn’t just the why or what.
Instead, consider: hereabout
I think there’s more; there’s more, no doubt.

So try to find the humor and
remember, life is seldom planned,
and when that pitch comes, don’t ground out.
I think there’s more; there’s more, no doubt.

Notes:  Both poems were written in the form Kyrielle Sonnet.  My first poem was inspired by Theme Thursday's prompt word of 'view' combined with the above picture.  My second poem was created after the prompt word of 'choices', kindly provided for by Poets United Thursday Think Tank.

* A firedrake, per the One Look Dictionary is "a creature of Teutonic mythology; usually represented as breathing fire and having a reptilian body and sometimes wings."
Posted by RJ Clarken at 11:01 AM