Ghosts of the Theater - Acts I and II 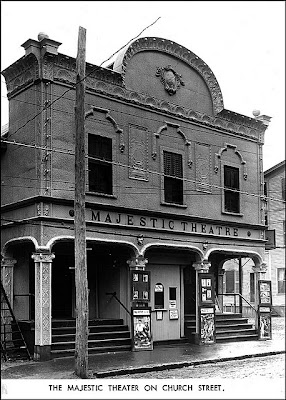 The silent films and talkies turned
the stage show into something spurned.
Majestic’s lavish time had passed:
like Vaudeville, she could never last.

This poem is an ode to what
(like Vaudeville) was not meant to last.

A siren of the silent screen,
she was ‘The Vamp,’ a movie queen.
Her costumes were once thought ‘risqué’
but Bara, in her day, held sway.

In Hollywood, the Walk of Fame
contains a star for Theda’s name.
‘Though Mary Pickford had cache
Ms. Bara, in her day, held sway.

A siren of the silent screen…
La Bara, in her day, held sway.

Notes: The inspiration for the two Kyrielle Sonnets (yes, I'm at it again!) was Sepia Saturday's prompt of 'theater' along with their posting of the archival photograph of the Majestic Theater (see above.)  At first, my thought was to write a poem about one of the old grande dames of the silent era (Theda Bara) but then I decided to pen something about the old Majestic, too.