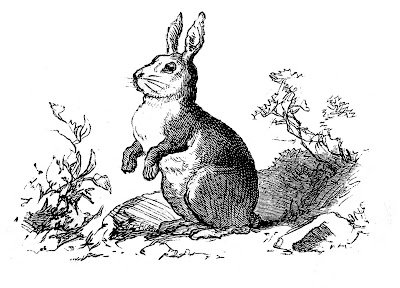 A fuzzy critter did intrude
in my backyard to seek some food.
But carrots?  There were none of those.
Poor bunny’s lost, I would suppose.

He hopped and wandered to and fro
in search of veggies, grass…but ‘though
he found some ivy and a rose
poor bunny’s lost, I would suppose.

I felt bad for this bunny who’d
just wanted lunch, which he’d pursued
into my yard, with garden hose.
Poor bunny’s lost, I would suppose.

So I checked out my crisper bin.
I got a cuke and sliced it thin
and set it ‘fore the bunny’s nose.
The bunny ate the food I chose.

Notes:  The form is Kyrielle.  The picture was a vintage (and apparently unattributable) one which I found on the Internet.  The idea was inspired buy two things:  Sepia Saturday posted a picture of a woman with a very shaggy bunny as their prompt (see below) and also, my daughter kinda likes bunnies. 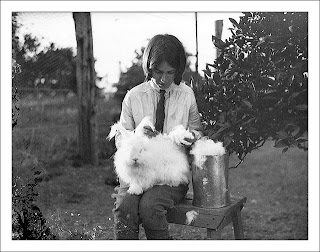