Wow. This was one mega-challenging challenge.

In honor of the Chinese New Year, We Write Poems put forth the plan that all of us savvy writers should make a triptych (or three diverse columns) which are to be headed: Heaven, Earth and Man.  Then, we should write a list under each category which may be comprised of words, ideas, phrases, thoughts, etc. which interconnect them - and when we have enough of these notions on our lists, create a poem from this cryptic, elliptic triptych.

For reasons that I can't explain, I started listing things beginning with the letter 'C' as you can see below: 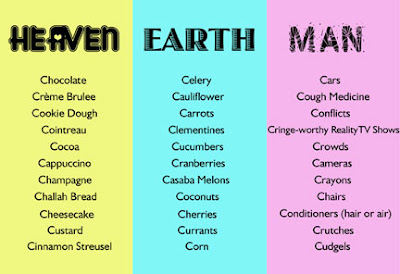 and my idea was to list Heaven as divine foods, Earth as veggies or fruits which come from the earth, and finally, Man as stuff that men and women have invented or manufactured (for better or worse.)  They're pretty cool lists, if I do say so myself!  But anyway, from these lists, I chose one from Column A, one from Column B and one from Column C - and wrote a triple Novelinee poem.

Heaven, Earth & Man
Cannolis are…
…pastries loaded full of Italian cream,
often with chocolate chips (just an add-in.)
Some people think they’re a pure, divine dream,
a gift from the gods, designed to gladden.
I like to eat mine with cappuccino
that’s dusted with a dash of cinnamon,
topped with whipped cream and a maraschino.
I know these treats won’t help me to stay thin
but cannolis are my heavenly sin.
Cucumbers are…
…long skinny tubes of this green seeded veg
which you can slice or dice for a salad -
it’s tasty when tossed on a lettuce wedge
and Kirby and English are cuke-valid.
Some like it on bagels with cream cheese, lox
and onion and a smidgen of smoked fish.
You can carve ‘em and sculpt ‘em into blocks
or any other shape that you might wish.
Yep, cucumbers rock as an earthly dish.
Crappy is…
…cringe-worthy reality TV shows
like The Bachelor or Wife Swap.  Man, they bite.
Every ‘real housewife’ just seems to expose
how boringly trivial, and how trite
television has gotten.  Still, we watch.
The Marriage Ref along with Jersey Shore
have me wishing they’d kick it down a notch.
The Kardashians are a crashing bore
Reality TV? Man, who wants more?
###
(I'll be back later with another post based on inspired prompting from Three Word Wednesday, Sis/Few Miles and Poetic Asides.)
Posted by RJ Clarken at 9:52 AM